“Keeping Up With The #Botox”

The Dumpsta Players take on the blurred line between entertainment and politics in “Keeping Up With The #Botox.” Philly girl Amanda Playwythe goes to Hollywood to make it big and encounters a has-been producer who introduces her to 70s sitcom stars “All in the Family’s” Sally Struthers and “M*A*S*H’s” Loretta Swit. Amanda’s odyssey takes her to a Donald Trump fundraiser with Kim Katrashian, Jake Jellyhole, and Adele.

A portion of proceeds benefit PhillyCAM.

The Dumpsta Players’ final show at Bob and Barbara’s Lounge will be “Prom Trash All-Stars,” held on April 20, 2016. The Dumpsta Players will continue to create original content for their television show on PhillyCAM.

DP Arts Consortium offers a variety of educational programs about performance and drag. 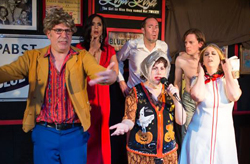 All material on this website (photos, videos, text, and information) is copyrighted by DP Arts Consortium under the following Creative Commons license:

This work is licensed under a Creative Commons Attribution-NonCommercial-ShareAlike 4.0 International License.